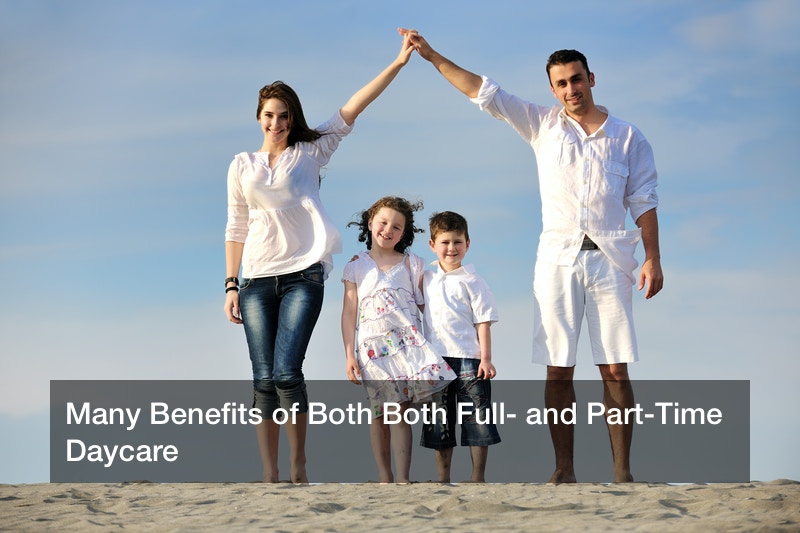 Many Benefits of Both Both Full- and Part-Time Daycare

If you have kids and all the adults in the house work, then you may be looking at choosing a daycare at some point. Choosing a preschool or daycare is a big decision, and you will want to consider several factors before making a decision. The factors that you focus on will likely depend on your personal situation as well as your beliefs and goals.

There are more than 30,000 private schools in the U.S., and a large number of these schools offer some kind of pre-kindergarten program. This may be a full-scale pre-K educational program or it may be more of a daycare that includes younger kids. Benefits of daycare at a private school program can include religious instruction if that is something you desire, as about 80% of private schools have a religious affiliation. You might also get higher quality teachers and less turnover.

There also are publicly run daycares, but these often are only open to people who qualify financially. If your income is low enough, then you may qualify to have your child attend a daycare run by a school or some other government agency. Benefits of daycare run by a public agency can be low cost. However, there can be disadvantages of such a program as well, including having to be on a waiting list before being able to get a spot.

There also are private daycares that are not affiliated with a school. These often are run either by an individual or by a company that specializes in running daycares and preschools. Some companies run their own daycares as an added benefit for their employees. Such daycares may also be open to people who do not work at the company, but it often depends on demand.

If you only need daycare occasionally, one option may be to send your child to camps. More than 11 million children and adults attend camps each year. Many camps are during the summer when kids are out of school, but both public agencies and private businesses may offer camps at other times that kids are out of school, such as during spring break or over the Christmas break that nearly all school districts have.

Whether you work full time or stay home full time with your child, there are many benefits of daycare, even if it is part time or just an occasional thing in the form of a camp. There are a number of both public and private options that give you many choices to meet your situation.